This very particular breed was born in Czech Republic on the second half of the ‘50s.In order to improve health and resistance of boarder dogs working near Libijovice it was thought to use a hybrid with Carpathian Wolves instead of choosing a domestic breed of dogs. The idea was that the wolf would give it’s descendants all the characteristics that made it legendary: Courage, cunning, persistence.

But things didn’t all go as planned, because wolves have another characteristic which is not at its most in dogs: they have a very strong fear of Man. Another problem: although they have an almost identical genetic background, wolf and dog are two different species, and in nature they are enemies since thousands of years. So, when Eng. Karel Harel tried to mate the female wolf Brita with a German Shepard, he found a furious female and a would be stallon dead. Unfortunately the problem occurred again at the following heat, because Hartl made a mistake: hoping to obtain a  tame and easy to train dog, he tried to mate Brita with calm and gentle tempered males.

Unfortunately this was not the right approach: female wolves do not like tender modes and gentle words, they need a real “macho” to give their virtues…maybe because they know that the world out there is tough and do not want to have puppies from a father who will not be at appropriate to the situation. So, after some tragically ended tries, Karel Hartl decided to try with Cesar Z Brezoveho Haje, a working German Shepard with an extremely “tough” character.

Brita, as soon as Cesar entered her field, reacted aggressively as the other times…but this dog was of another kind, and reacted strongly holding her by the neck. Brita, submissively calmed down and started to accept his courtship.

It seemed a success: on 26th of May 1958 the first wolfdogs were born. Unfortunately nobody could get near them. Probably, during the night, Brita read to the puppies the story of “Little red riding wolf”, about a poor innocent wolf, hunted by an  merciless hunter. Seriously speaking, Brita being a good wild wolf mother, gave her puppies an imprinting which included mistrust and fear towards Man.

It took 3 generations, and the early separation of the puppies from the mother, to obtain hoped result: a trusty towards Man, tame and trainable wolf-dog.

During the second part of the ‘60s there were already 4 generations of crossings from the first bloodline (Brita x Cesar) and two generations of a second bloodline between Brita and a second male German Shepard Kurt Z Vaelavky: but the Breeding Union refused to register the breed, using as an excuse the few number of existent subjects. In 1968, at the National Police Kennel, a third bloodline was introduced, this time with a male wolf, Argo, mated with a female
German Shepard Ura SNB. In 1970 there were 200 elements of Check wolfdog (first name given to the breed), but still the reply from the kennel Club was negative.

Only in 1981 the German Shepard breeders had to surrender to evidence: the new breed was in constant expansion and it was impossible to stop it. With or without the recognition it would have continued to exist and to take from the German Shepard a share of its public: maybe it was the time to stop because the ostracism of the official canine world had the only result to make the breed more interesting.  So the Check wolfdog was finally registered and the following year the name was changed in Czechoslovakian wolfdog.

Karel Hartl started to right the Standard of the new breed: but he clashed against the German Shepard breeders, that pressed the Check Breeding Union to prevent the recognition.

In 1989 FCI recognised the breed and it’s standard.

From 1983 till today wolves have no longer been used, but mating has been made only between CSWs: recently though, the possibility to use wolves again has been discussed in order to defend the breed from hip displasia which is becoming unfortunately an important problem. Actually the idea is not to use wolves again but to use a different breeding program, using the recent genetic knowledge in order to face the hereditary problems in the best way: at the moment, however, we have no news on the final decision of the breeders. 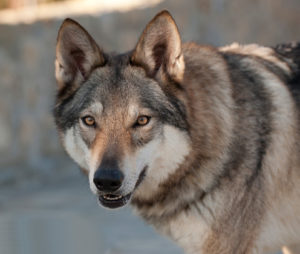 The general type is of a solidly built dog, above average size, rectangular frame.
It is similar to a wolf in constitution, movement, coat texture and mask.
The ratio between body length and withers height is 10:9.
The length of the muzzle has a ratio of 1:1,5 with the length of the cranial region.
The head, symmetrical and well muscled, seen from the side and from above, forms a blunt wedge. Sex should be unmistakable.
The forehead is slightly arched with no marked frontal furrow.
Nose has an oval shape and is black.
The muzzle is clean, not broad and the bridge of the nose is straight.
The lips are tight, without gaps at the corner of the mouth and the rims of the lips are black.
The teeth are 42 according to the usual tooth formation, with a regular teeth set and well developed, specially the canines.
Scissor or pincer bite are possible.
The eyes are small, slanting, amber coloured with close fitting lids.
The ears are straight, thin, triangular, short (not longer than 1/6th of height at withers).
The lateral point of the set on the ears and the outer corner of the ayes are in a direct line. 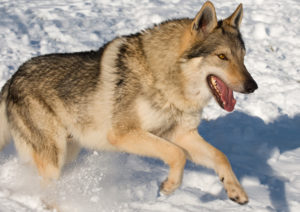 The neck should be dry, well muscled: forming in repose an angle of up to 40 degrees to the horizontal.
Neck should be sufficiently long for the nose to touch the ground effortlessly.
Topline shows a flowing transition from neck to body.
Withers, well muscled, are pronounced but without interrupting the flow of the topline.
Back should be firm and straight.
Loins are short, well muscled, not broad, sloping slightly.
Croup is short, well muscled, not broad, falling away slightly.
Chest should be symmetrical, well muscled, roomy, pear shaped and narrowing towards the sternum.
The depth of chest does not reach to the elbows.
The point of the sternum does not extend beyond the shoulder joints.
Lower line and belly: Taut belly, tucked up. Slightly hollow in flanks.
The tail is set on high, hanging straight down. When dog is excited, generally raised up in sickle shape.
The front legs are straight, clean, close together with slightly turned out feet.
The shoulder-blade is placed rather far forward, well muscled.
The hind legs are powerful and stand parallel. 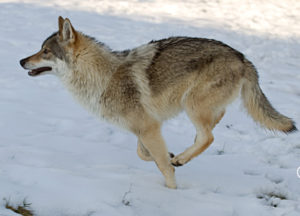 An imaginary vertical line drawn from the point of the ischium, would run midway through the hock joint
The hip joint is sturdy and flexible.
Feet should have longish, arched toes with strong dark nails.
Trot is harmonious, light footed, ground covering in which the limbs skim over the ground as closely as possible.
Pacing when walking.
Skin is elastic, tight, without wrinkles, unpigmented
Coat is straight, close.
In winter an immense undercoat together with the topcoat, forms a thick coat all over the body.
Colour should be yellowish-grey to silver-grey with a characteristic light mask.
Height at withers is for dogs at least 65 cm, for bitches at least 60 cm.
Weight should be for dogs at least 26 Kg, for bitches at least 20 Kg. 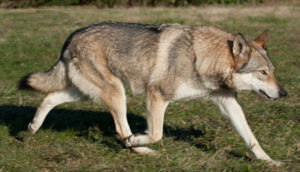 The behaviour of a Czechoslovakian wolfdog differs from that of other dogs: its ancestor wolf genes left it as inheritance some characteristics which have been lost by most of the domestic dog breeds.
Wolves, in fact, live in a pack following a complex hierarchy: each element covers a well defined role.

Sexual maturity occurs between 2-3 years and young elements remain in the pack in order to help growing up the future litters.
Males give females all their attention and once a couple has been formed it lasts usually all their life.
Females have heat every 12-15 months.
Puppies are born in winter so that in spring they will be strong and vigorous.
Their drive when playing or running is less aggressive as in dogs.
Wolf communication is various: apart of course howling, they express their feelings through mimic, both of face and body, through a different vocal pitch and by lifting the fur. 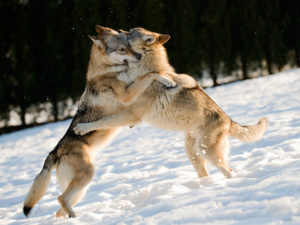 All this to express emotions as dominance, submission, forgiveness, play, warning of danger, joy, pain, fear, anxiety.
Their behaviour is never without an aim, always finalized to obtain their goal.
We find all these characteristics, more or less consistent, in the Czechoslovakian wolfdog.
They have an exceptional resistance: they can stride even 100 Km without being excessively exhausted. They recover twice as faster than dogs.
Of course Czechoslovakian wolfdogs have inherited not only virtues of wolves, certainly also defects.
They are stubborn and sly and put their owners continuously at a test.
Since when they are puppies they seek their position in the pack, which in this case is the family. It depends only on the owner to avoid it to position itself on the wrong level.
It understands, instinctively, who is at the top of the hierarchy. It is therefore absolutely unadvisable to leave its education to children who they protect but do not obey, because also children are under the head of the family.
It respects, loves, protects its owner and sees him as an Alfa, and never wants to part from him. 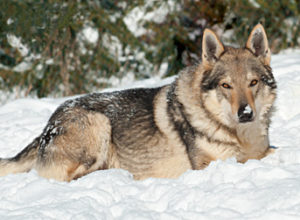 It is very sensible: it is best not to breed it if you have no intention to keep it with you for the rest of your life.
For its versatility, intelligence, receptiveness it will not be difficult to see it in Agility contests, pulling a sleigh and in various canine activities as Civil Protection, Alpine Assistance, Police and Army.
Its speciality is to follow and elaborate smelling tracks thanks to its great sense of smell.
Great in personal defence and as a guard dog: a difference with other breeds is that it considers the intruder as prey and attacks from behind.